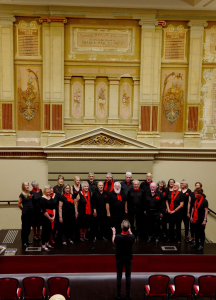 The choir is celebrating its 30th year, after forming in Melbourne in 1990 as part of a revival of trade union choirs throughout Australia. We are union members who see the choir as belonging to the union movement, providing a musical voice to its message. We sing in acapella style—able to perform anywhere the voice of protest needs to be heard—in Melbourne, Victoria and beyond!

Our aims are to:

For 30 years the Trades Hall Council has provided us with an historic and elegant rehearsal space. For this we are eternally grateful.